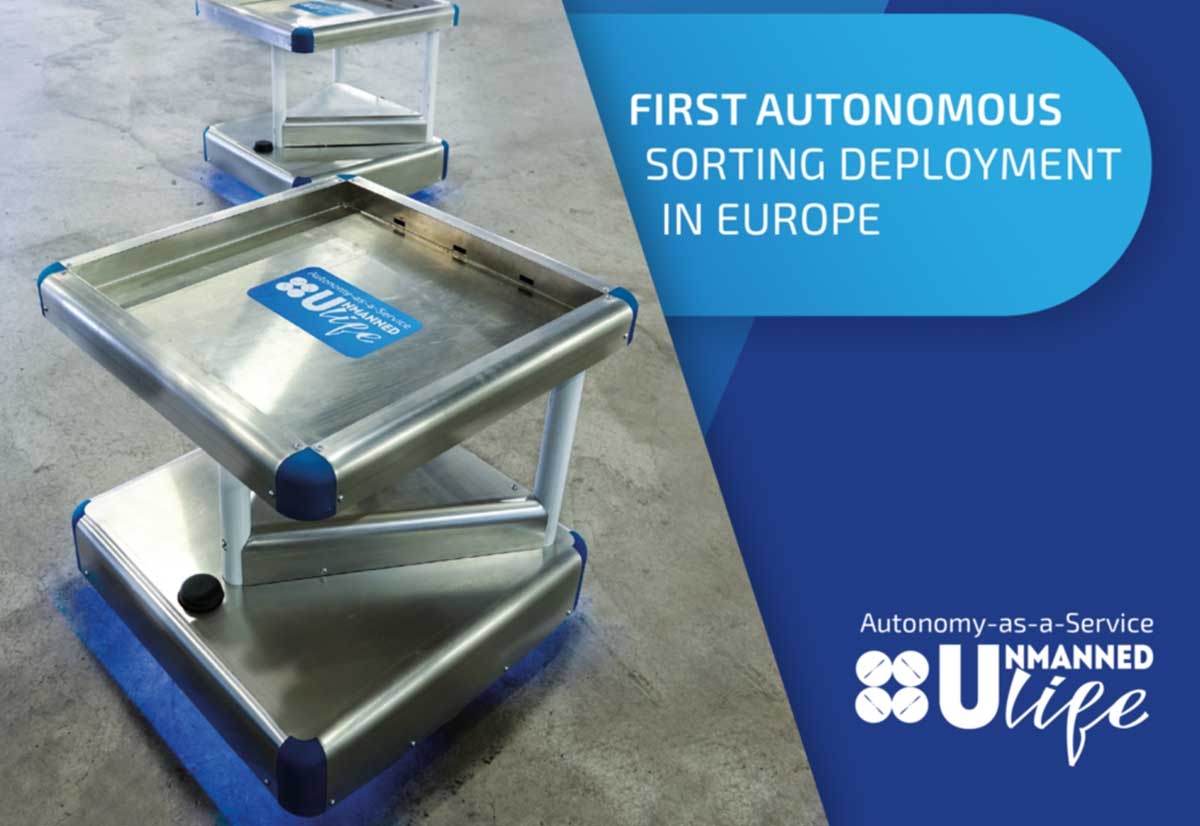 On the 4th of July 2018, Unmanned Life pioneered the first Fully Autonomous Parcel Sorting Center in Europe for Swiss Post.

Yet another unprecedented achievement by the company, assuring their role as leaders of innovation at the vanguard of the upcoming Autonomous Economy. In just 3 years Unmanned Life has continued to drive ground-breaking change with their AI-driven IoT software platform that delivers Autonomy-as-a-Service across sectors, enabling Industry 4.0.

The project was a resounding success. In just under 3 months, a fully autonomous sorting solution was designed and delivered on time, on budget and with results exceeding the agreed KPIs. It should be fully operational by the end of the year. Swiss Post is one of the biggest postal operators in Europe, and the second biggest national employer. Here is the footage of the first Autonomous Sorting deployment in Europe:

Video of the autonomous sorting solution for Swiss Post

In the video, you can see the autonomous sorting solution: Sorting is performed by 4 autonomous mobile robots that execute the sorting process from A (unsorted) to B (sorted), taking parcels and packages swiftly from one to the other. The system is fully flexible and scalable. It can be deployed both indoors and outdoors, over WIFI, 4G LTE or 5G, both locally and over roaming networks.

What is truly remarkable is that all of this is Pure AI-driven, there are No Cameras either around the center or on the robots themselves, no markers on the ground and No laser systems are being used. The Unmanned Life AI driven software platform uses advanced real-time digital point vector mapping and state-of-the-art Machine Learning to learn, adapt and optimise both each individual robot and the system of robots as a whole. This means the robots can be deployed anytime and anywhere there is a flat surface.

The solution is integrated with enterprise business information systems and AI stacks to enable an end-to-end modular and scalable solution. You can add capacity by adding robots on-demand and change input or output directions at will without the need to deploy further infrastructure, making it the perfect adaptable solution for any logistical operation.

It is an asset-light system that can be deployed anytime and anywhere, moved from one location to another, and collaborate with humans without any risk. As you can see, there are still some human workers needed to load and unload the parcels, but their jobs are vastly improved and they safely and simply work alongside the autonomous robots. This game-changing technology will forever change the face of the postal industry paving the way to the autonomous economy.

Success? Not only did the solution prove to be faster and more efficient than expected, the software platform also delivered a 0% error rate. Throughput? The PoC was 465 parcels an hour in a sorting area of less than 100m2 which can easily be scaled up to a throughput of 2000 parcels per hour on an area of 250m2. From expensive and inflexible conveyor belt systems, this asset light autonomous sorting solution can save a warehouse $0.8 to $1.6 per year. The Unmanned Life solution architecture consists of a central control platform, which is fully integrated with any existing WMS system, a configuration interface, parcel scanning solution and AGVs for regular and irregular parcel sorting.

From traditional conveyor belt metrics, it has 5x lower CAPEX, it is 6x faster to deploy, can operate 24/7 365 days a year, and dramatically increases ROI from 5-8 years to just 1-3 years.

Why is the solution needed?

The face of the postal and logistics industry is changing. The phenomenal growth of e-commerce is creating a demand for ever more packages, to be delivered at ever greater rates, and current models are struggling with the demand. According to a recent study,

The postal industry is threated by some major challenges:

Why should companies adopt the Autonomous Sorting Solution?

Forward-thinking distributors want to plan ahead to beat competition and thus achieve substantial returns on their investment. Over the last two decades, customer expectations have increased, commerce has increased exponentially, and big picture distributors are looking to smart solutions to handing the changes and increase profitability. When Fortune 500 companies began adapting their warehouses in the 1990s, supply chains were vastly different to today. Large-scale structural changes to supply chains are unappealing to firms due to expense and time. Amazon had only just been founded and was just selling books and CDs. There were fewer security threats, less competition, consumers were more modest and supply chains were regional.

In the hyperconnected, globalized and competitive environment of today, distributors need to rethink their warehouses, and the Autonomous Sorting Solution is affordable, quick to implement and easy to integrate.

Transitioning to autonomous sorting is one of the biggest single warehouse efficiency gains capable by a distributor, with drastic improvements. Traditional sorting systems require over $1 million in CAPEX to process 3,000 parcels per hour. Our Autonomous Sorting Solution can match the performance with just one fifth of the investment. Combining Unmanned Life’s autonomous sorting and inventory checking solutions, a distributor could save more than $1m in CAPEX and $500K in annual OPEX per warehouse.

Around the world, industries are undergoing digital transformations to meet the demands of a globalized world. The postal and logistics sector is looking for autonomous solutions to upgrade their services and remain competitive, and our solution is a simple and affordable means to handle greater volumes and retain their edge in the industry. Autonomy-as-a-Service through the Unmanned Life platform can be seen once again to enable the autonomous economy and Industry 4.0. 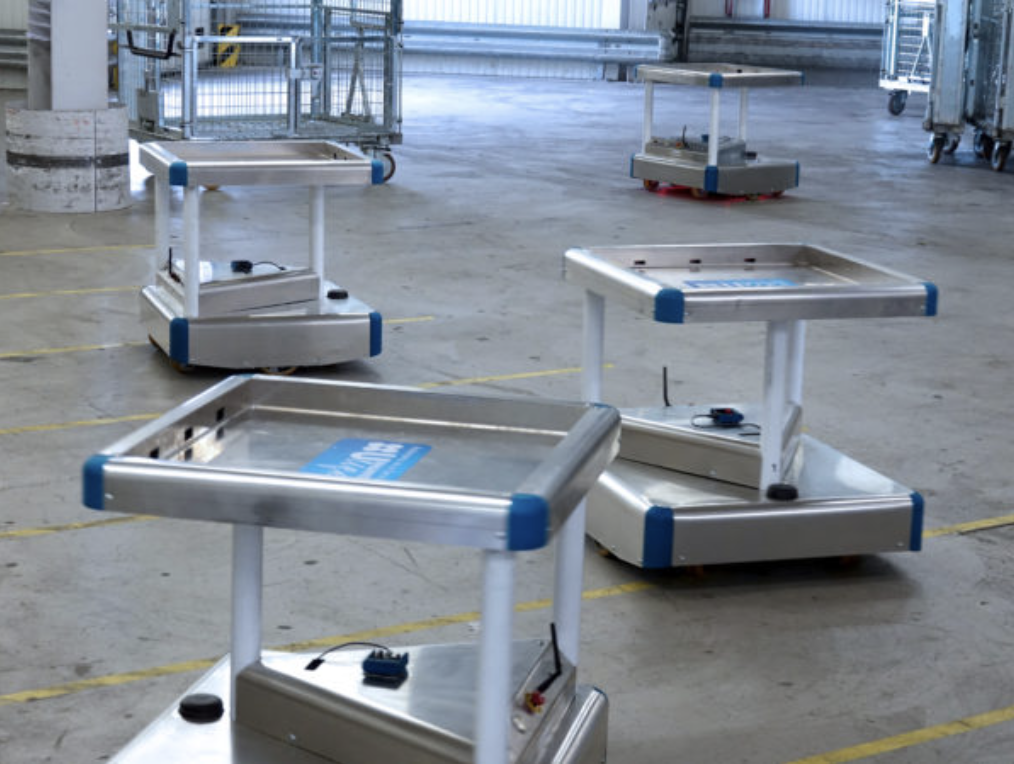 What is an Autonomous Sorting Solution?

As we recently proved, our AI software platform can sort packages between input and output gates, through deploying an autonomous robotic fleet. It is the proposed alternative to traditional conveyer belt technology with an easily integrated, fully flexible and highly secure autonomous solution. Our autonomous robotic fleet is cost-effective, modular and scalable, and matches or exceeds other solutions in every way: lower CAPEX, higher productivity, more flexible, easy to set up, and it has a software error rate of 0%.

It can be tailored for individual needs and has a solution for every challenge. For pop-up capacity, irregular packages, warehouse upgrades and new capacities, the solution has resulted in lower CAPEX, 4x times less space needed and an improved efficiency and modularity.

The success of this deployment has enormous implications, it could have ripple effects across the industry as ever more postal operators recognize the benefits of the autonomous solutions. Around the globe, the postal and logistics sectors from Swiss Post onwards will be looking to us for the autonomous alternative for a smarter future. From traditional conveyer belt technology and inflexible systems, the autonomous solutions of Unmanned Life provide maximum productivity, faster sorting and self-improving technology with a 0% error rate.

In the 1700’s the first Industrial Revolution brought us mechanical production equipment. Electricity and the Internet resulted in the next two revolutions. Industry4.0 is here, and Unmanned Life are at the forefront with Autonomy-as-a-Service offering disruptive autonomous solutions across sectors. The future is autonomous!